This past Saturday I took part in the Saratoga Springs Food Tour without much awareness of what the tour would be like for a local who’s lived here pretty much her whole life. The tour group met at the Saratoga Farmer’s Market near the little green shed and from there we were given a bottle of water each (thank God since it was 90 degrees out) and started walking.

The first stop was at 50 South’s booth, where we were given a bag of Saratoga Chips and we all sampled the various So Lively Tapenades they had available.

Next stop was down at the Saratoga Peanut Butter Company’s booth. We learned about the differences between their peanut butter and other brand name peanut butters, including the fact that theirs aren’t made with any additives and fit into most special diets.

My personal favorite of the Saratoga Peanut Butter’s is the Monkey Boy, a blend of peanuts, raisins and bananas. It’s super flavorful and really quite pleasing.

We continued along to the Argyle Cheese Farm tent, where they sell all the dairy products one could want, including their greek yogurt.

The Argyle Cheese Farm representative told us all that once you taste their greek yogurt, store bought yogurt will never taste the same. Well friends, he was SO right. This greek yogurt was the creamiest yet simplest yogurt I’ve ever had. I think what truly sets it apart is the fact that it tastes so fresh and so real. There are no fillers or sugars, just the real deal, healthiest yogurt you can find. If I could buy this yogurt in bulk, I totally would.

Moving along, we did visit another local cheese farmer, Sweet Spring Farm from Washington County and sampled their goat cheese, but because it was almost 1pm they were pretty much sold out of everything. I can understand why, the goat cheese I sampled was incredible. So rich and creamy but with a very slight sharpness.

The last stop at the Farmer’s Market was at Anna Mae’s Homemade Jam. As a youngin, I have very vivid memories of the Saratoga Farmer’s Market when my mom and dad used to walk on Saturday mornings. Out of the vendors they’ve had through the years, I remember Anna Mae’s being one of the few that were at the market back then and still set up shop now.

The memories of those little white crackers with a spoonful of jam to taste came right back as soon as I saw them on Saturday. Anyway, this jam is really something special. Anna Mae makes all her jam with a very interesting variety of flavors. This is a must stop if like me, you’re a big fan of unique jam that is light years better than anything you can find at the grocery store.

Once we finished at the Farmer’s Market, we walked up to Olde Bryan Inn, where there was a whole table set up for us. Once we sat down, we were served a portion of one of the menu appetizers, the balsamic beef tips bruchetta.

Holy moly. Even though it was only half of a normal portion, the sampling that we got was incredible. The beef tips were so incredibly tender and juicy and the garlic crostini was toasted and buttery. When I go back to OBI, this is definitely something I will be ordering. When we were there, we also learned some more about the history of the Olde Bryan Inn as well as some basic history on the city itself.

After we finished our apps and the rain cleared (did I mention it was pouring?) we continued our tour at the Saratoga Olive Oil Company.

This place is seriously an attraction for visitors and locals alike. The tasting room consists of dozens and dozens of infused olive oils and aged balsamics. You can mix and match, put two together, whatever you’d like. One thing I learned at this stop was how you’re supposed to taste. Once you pour a little of the oil into the tasting cup, you’re supposed to rub the bottom of the cup against the palm of your hand to warm it up. This allows the flavors to really resonate once you finally taste it. Hey you learn something new everyday!

We walked down the street some to Saratoga Salsa and Spice, formerly known as Hot Stuff of Saratoga.

The tasting here was some of their salsa and my favorite bloody mary mix EVER.

It doesn’t get any better than this mix right here. It’s thick, it’s spicy and it’s so good that I would drink it with or without the vodka. Yupp, that good.

Finally, we made our way to Cafe Gelato, which was a pleasant surprise because most groups end at Bettie’s Cupcakes. We learned a little background on the difference between gelato and ice cream and then sampled three of their flavors. It was definitely a sweet way to end the tour (haaaha – get it?)

At the end of the day, the Saratoga Springs Food Tour is a great way to spend a Saturday afternoon, regardless of whether or not you’re a local or just visiting the area. While you may think you know everything there is to know about Saratoga, I guarantee there’s more to learn, and chances are you’ll learn it during these 2 1/2 hours. Make a reservation though, these tours fill up quickly!

Who else has been on a Saratoga Springs Food Tour? What did you think? 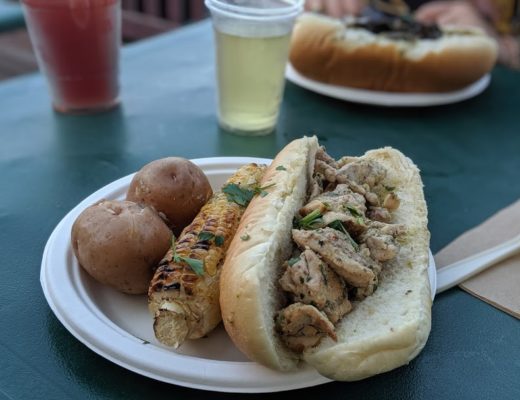 My Day at Amorici Vineyard 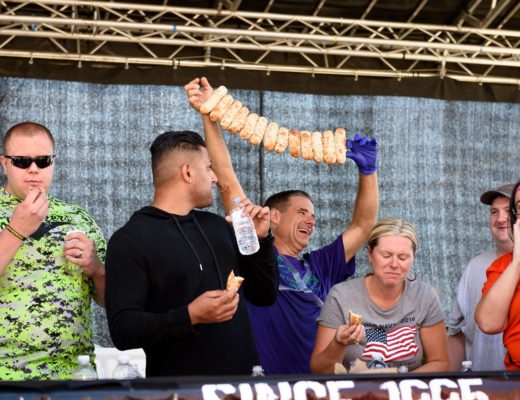 Things to Do: Independence Day in Saratoga