Earlier this week we learned that Siro’s was under new ownership and had a new chef, just in time for the 2019 racing season. And I mean JUST in time.

Siro’s has been a Saratoga staple for as long as I can remember, with it’s extremely close proximity to the Saratoga Race Course as well as hosting what always seemed to be the rich and famous in their dining room.

In my adult life, I’ve only slummed it outside at the bar area, but never have I eaten inside.

Now with Chef David Britton as executive chef, everyone’s waiting and wondering how the NEW Siro’s compares to the past.

Generally I stay away from new establishments (or new chefs) for a little while to ensure I can provide a comprehensive review once FOH and BOH staff is up to snuff, but this time the opportunity presented itself to go there on opening day, and I took it.

I did not take any pictures of the menu, but the Table Hopping Blog did just last night which you can see here.

I can’t say I was shocked by the prices, because it’s Siro’s and it’s Saratoga. If you didn’t click on the menu link above, it’s expensive. We’re talking $22 for a Caesar Salad expensive. It does include fried calamari on top of the salad, if that helps at all.

The beets had just a hint of acid from the curry vinegar, and were cooked perfectly. The asparagus added a nice snap to the dish, a texture that was definitely helpful here.

As far the tempura egg, I didn’t really feel it added much. I mean I understand the purpose behind it, adding a nice fat element to the plate. However, if I could have had a touch more salt and a drizzle of olive oil, I think it would have brought it to the next level.

For my entree, I went with another appetizer. None of the meats or fishes were calling my name, so I opted for the Cannelloni of Smoked – Roasted Eggplant ($27). This had butter poached lobster, tomato vinaigrette and tomato parmesan butter.

For an appetizer, I felt this was a pretty significant portion.

The lobster itself was absolutely perfect. It was buttery, succulent & tender. It practically could melt in your mouth.

The eggplant was…. confusing. First of all, I have never seen lobster and eggplant paired together like this, so I was excited for a new experience. Unfortunately, the eggplant lacked flavor. For a vegetable that will literally soak up anything it’s cooked with, it was surprising to me that it was so bland.

All I wanted was more basil, or any sort of fresh, herbaceous flavor that I could infuse into the eggplant. Still, I thought it was a good dish. This is just me being very critical.

I didn’t get a picture because there was a debacle over a second duck that had been ordered but didn’t make it to the table, but I did taste it and it was VERY good.

Everything from the chocolate balsamic poached cherries and quality of duck to the melted sweet potatoes, this was a great dish that I’d definitely recommend.

Overall, my opinion on the food is that it was good.

But for a chef that literally took the job ONE week ago, I think he did a great job.

Sure, there are other restaurants I could recommend for dining out during track season in Saratoga that will cost you less, but Siro’s has an allure about it and in part, you’re paying for that by eating there.

I wish them nothing but the best this summer and hopefully others who dine there find their experiences positive as well.

Soup and a Sandwich from Uncommon Grounds 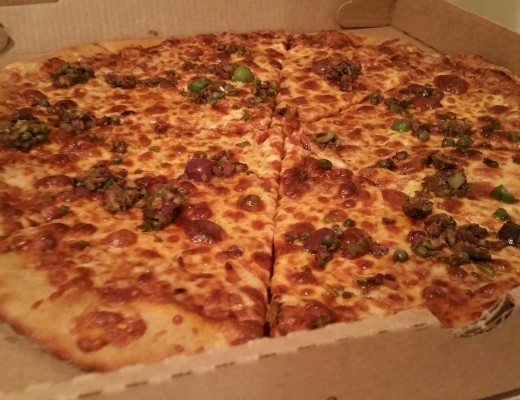 A Different Kind of Pizza at 9 Miles East