A Celebration of Flavors at Amuse

Let’s just say this blog post has been a LONG time coming. Not only because this is the first “review” of 2021, but also that it’s the first time I’ve gotten to eat at Amuse. I continued to kick myself all quarantine long that I never visited Amuse before everything shut down. But when I finally got to the fully-vaccinated status, I knew one of the first places I’d visit would be this restaurant.

Well, Friday night was that night, and it was everything I knew it would be and then some. You see, if you’ve stuck with this blog for many years, you already know Chef Dominic Colose is one of my absolute favorites. After spending many years at The Wine Bar of Saratoga, I was delighted to hear that he was starting something on his own.

I got a sneak peek back in the fall of 2019, what now feels like an eternity ago. Here’s a look back at that post.

On Fridays and Saturdays, Chef Dominic transforms the Saratoga Broadway Deli into a comfortable, inviting, and unpretentious space where you can simply enjoy the food and the aroma of the bold, Mediterranean spices in the air.

His menu changes weekly, but you can typically find dishes like hummus, baba ghanoush, stuffed grape leaves, and lamb chops on the menu. Yes, all the things that bring me joy.

Like hundreds of thousands of others, during the pandemic, Dominic told us he decided to try and focus his energy on bread baking. Lucky for us, he totally mastered the process, and now serves four different samplings of his bread as a complimentary starter.

Along with bread, he also shares another delightful treat… his house churned butter. Yes, you read that right. He churns his own butter and then adds in harissa to give it a beautiful hue of reddish/orange.

And that’s just the start.

FYI – we ordered half of the menu, so prepare yourselves for a lot of pics. For small plates, we ordered the hummus, stuffed grape leaves, and spicy eggplant.

The Stuffed Grape Leaves were so fresh, so light, and had the perfect blend of dill that was subtle yet a POP of flavor. The hummus was silky smooth and seasoned with za’atar to add a little kick of Mediterranean flair. Finally, the spicy eggplant was hearty and meaty while being perfectly vegetarian. Loved the heat from the chili peppers, too.

For entrees we ordered three half portions of the Lamb Tagine, Vegetable and Chickpea Tagine, and Cod Loin.

First off, we ordered way too much, yet managed to eat everything. Starting with the Cod Loin, it was simply fantastic. So light and tender, juicy and flaky. Cod is such a great fish and the preparation of it at Amuse was a true delight.

Onto the Lamb Tagine. This lamb tasted like it had been slow cooking for like 14 hours… it was so delicate and pull-apart tender. The sweet warmth of cinnamon and honey alongside apricots and preserved lemon offered multi-dimensional, unique bites.

Finally, the Vegetable and Chickpea Tagine was a lovely vegetarian option that was chock-full of flavor, but that’s no surprise. Each dish was comforting without feeling super heavy, which is probably why we were able to stuff ourselves to the brim and finish every dish off.

And as if that wasn’t enough… we ordered dessert.

The Lemon Olive Oil Cake really caught Tim’s eye, and apparently he had saved just enough room for it.

With homemade yogurt and blackberry sauce, this was the perfect ending to a perfect meal. It was sweet and tart, with each element complimenting the other. Absolutely my kind of dessert, right there.

If you haven’t been yet, I urge you to get yourself into Amuse for an excellent meal you won’t regret. With super reasonable price points, flavors you really can’t get anywhere else in town, and an ever-evolving menu, this is the type of place you can visit over and over again without ever tiring of it. 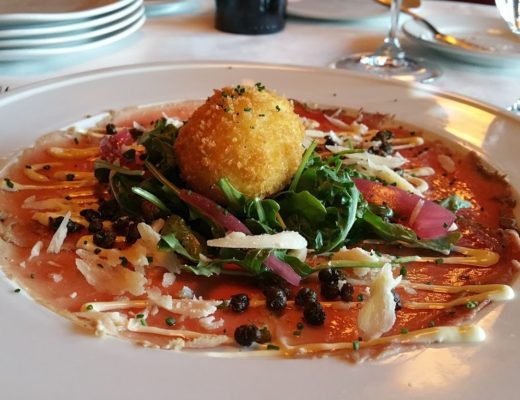 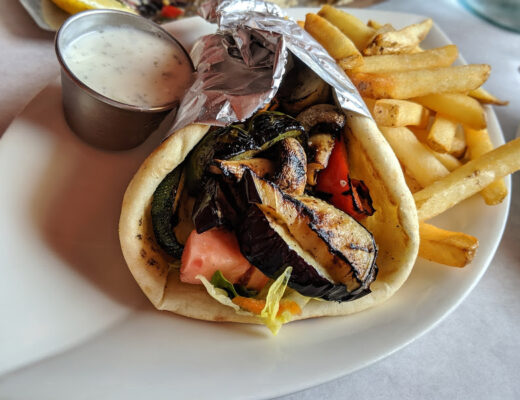